An Ad Hominem Argument Against GDP

5 random top posts
> Why (and How) You Should Join Twitter Right Now
> Research Ideas
> The Effects on Cognition of Sleeping 4 Hours per Night for 12-14 Days: a Pre-Registered Self-Experiment
> Every thought about giving and taking advice I’ve ever had, as concisely as possible
> Neurodiversity, mutants, and organisational design

Epistemic status: this is not the argument against GDP but it’s definitely underappreciated.

Suppose, you read about some study in the media and decide to check the study’s findings yourself. What do you do?

First, you can read the abstract of the paper and look at some summary statistics that the researchers provided. Most likely, you will realize that this is just another bullshit correlational study or that n is equal to like 10; sometimes, you will see that the effect is too large to be believable; occasionally, you will find that the summary statistics are actually impossible. You will definitely miss the dinosaur. Source.

Second, you can inspect the data itself. This way you can notice that, for example, the data looks kind of weird or, conversely, too normal; or you can notice that the researchers forgot to select some rows in Excel when analysing the data or let Excel interpret genes' names as dates.

Third, you can think about how the study’s data is defined, collected, and analyzed. Thus, you will understand how it’s possible that the US is the 10th most dangerous country in the world for women or that Sweden has the highest rape rate in the world; or you may come to understand how some fMRI analyses may feature up to 70% false positive rate; or how, for that matter, the entire quantitative scientific literatures can be complete bullshit. Likely, a consequence of treating statistics as a significance-producing machine.

Fourth, — this is where we start to ignore the data and move meta — you can look at the incentives people face when producing the data. Think about it for a while and you won’t be surprised to learn that countries routinely embellish their GDP data, PISA scores, and likely any other statistic of any consequence. When I interned at the Russian Government we analyzed the data on performance of some bureaucrats. I asked my boss if this data was used to promote those who do well, to which the answer was, “if we started using the data, everybody would just doctor it.”

Finally, you can look at the actual people who produce the data. Specific people collect, systemize, analyze and only then show it to us; and — even having incentives taken into account — it matters who these people are.

I have precisely one idea: estimating GDP (and comparing estimates over time) is an incredibly complex process and it matters who creates these estimates.

So, let me ask you a question: who would you trust with producing US GDP estimates and the methodology for estimating GDP?

And after you have a personal answer to this question, let’s see

In the US — Bureau of Economic Analysis (BEA). Besides various national, regional, international, and industry accounts, BEA produces the methodology for GDP estimation and the estimates themselves.

But before looking more closely at BEA, let’s take a slight detour to academia.

I looked at all professors of Economics, excluding visiting and emeritus professors, at several US universities. For every professor, I looked at the university they got their PhD from and at the RePeC rank I used the June 2018 ranking. of that university. RePeC stands for “Research Papers in Economics” and their rankings are considered to be somewhat canonical. Note that only top 280 universities are ranked, so if the university is not in top 280, I wrote down its rank as 280.

Below are histograms for Harvard (rank 1), University of Southern California (rank 25), University of Minnesota (rank 61), and University of Pittsburgh (rank 89). Initially, I wanted to pick ranks 1, 25, 50, 75, but universities at ranks 50-60 are not American, so I picked rank 61. Then, ranks 86, 87 are again not American, rank 88 (CMU Tepper) shows large discrepancy in the number of faculty listed on RePeC and on CMU’s site, so on a semi-ad hoc basis I decided to look at rank 89. 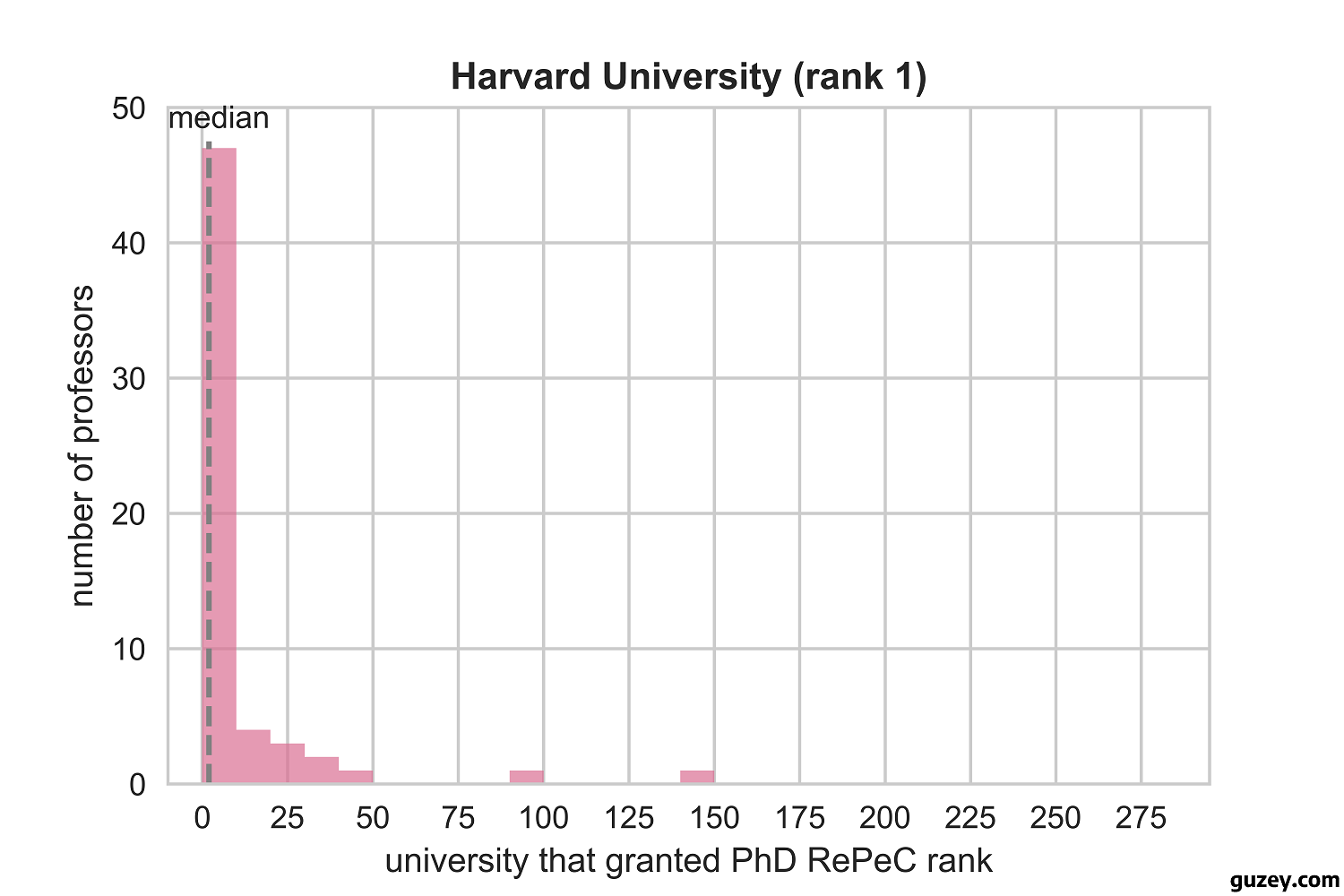 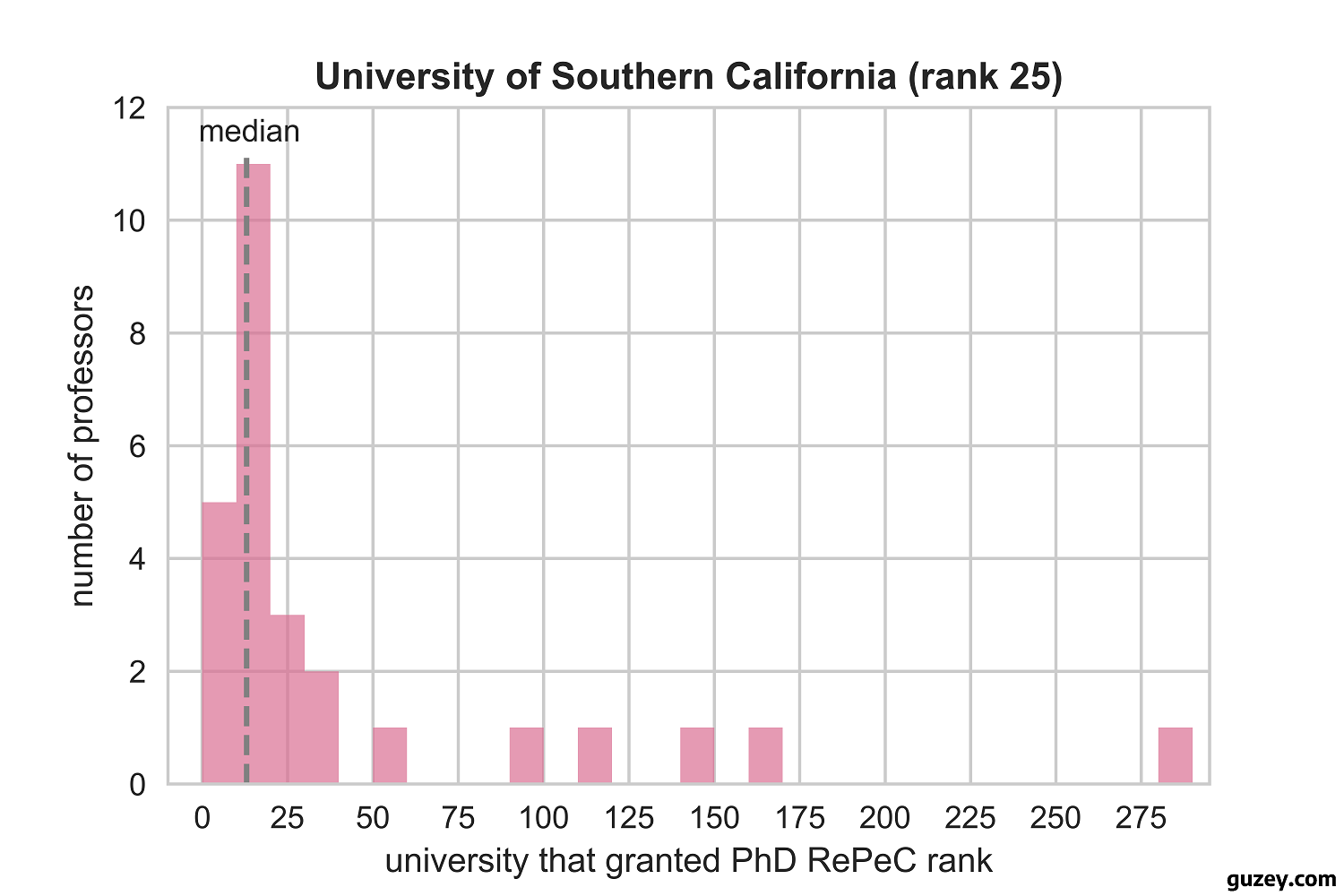 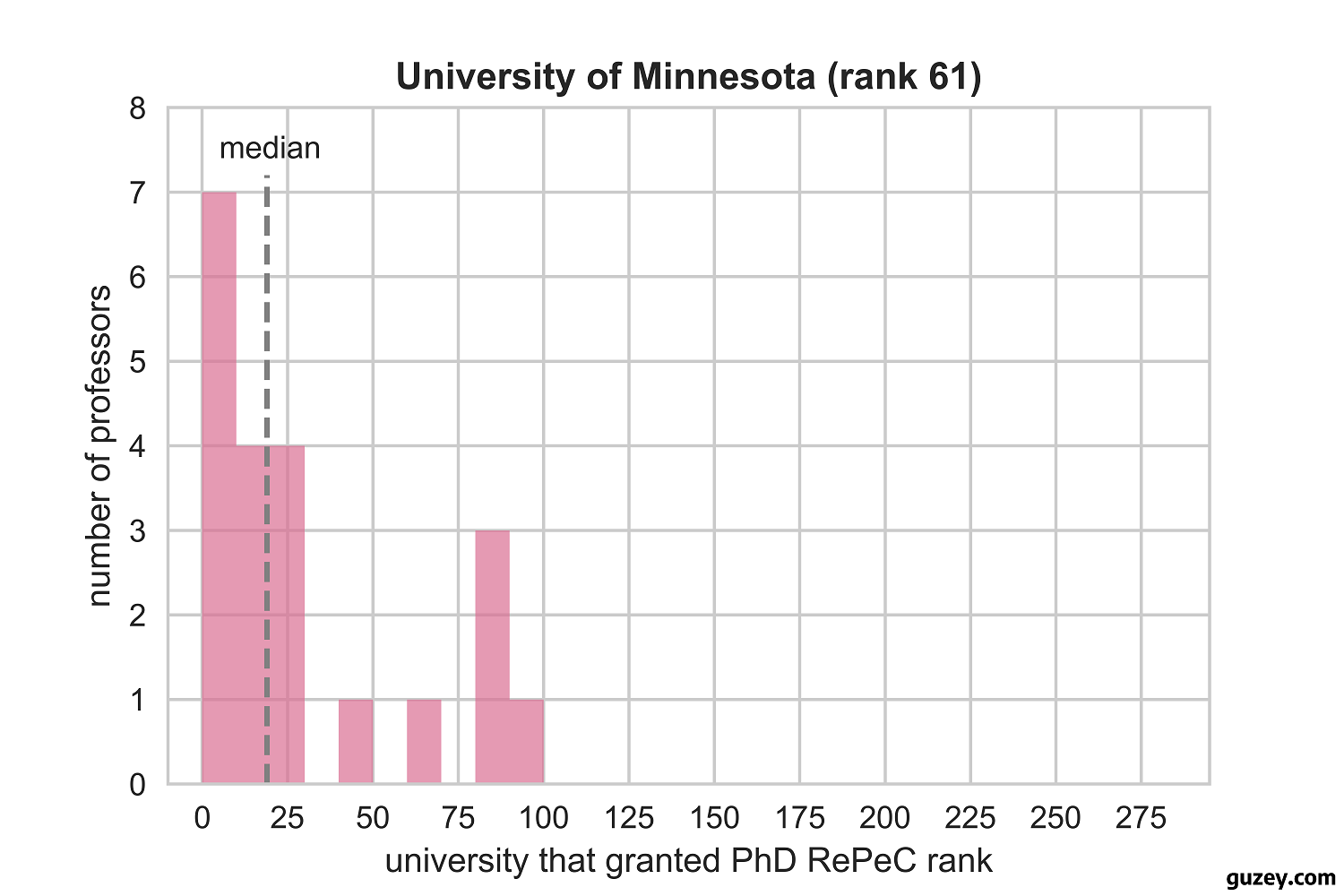 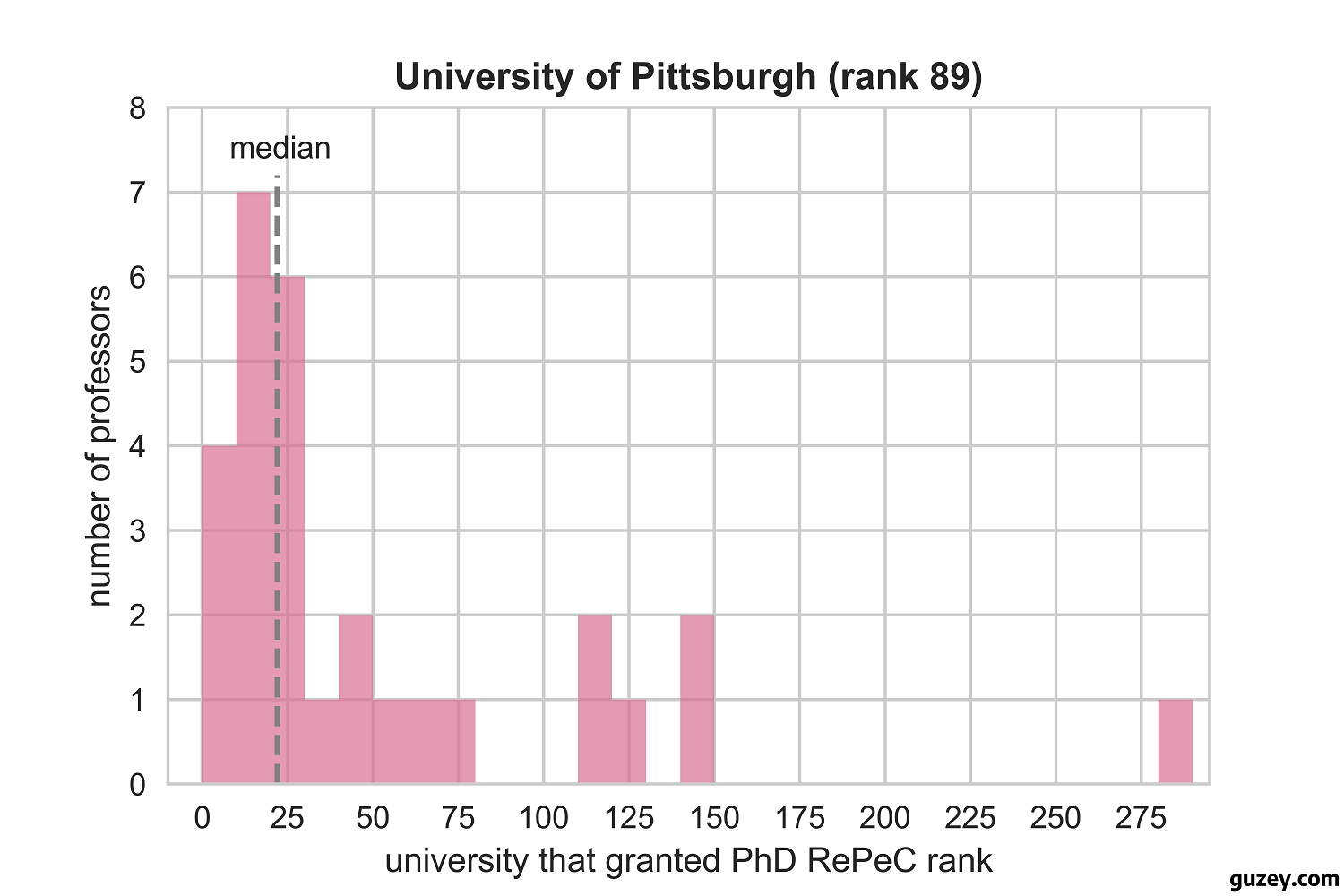 We can see a clear, if somewhat weak, trend from the pictures — among Harvard professors more than 50% got their PhD either from Harvard or MIT (rank 2). Then, the median steadily declines to 13 (Yale), 19 (Michigan), and 22 (Northwestern).

What if we build a similar histogram for the Federal Reserve Bank of New York? 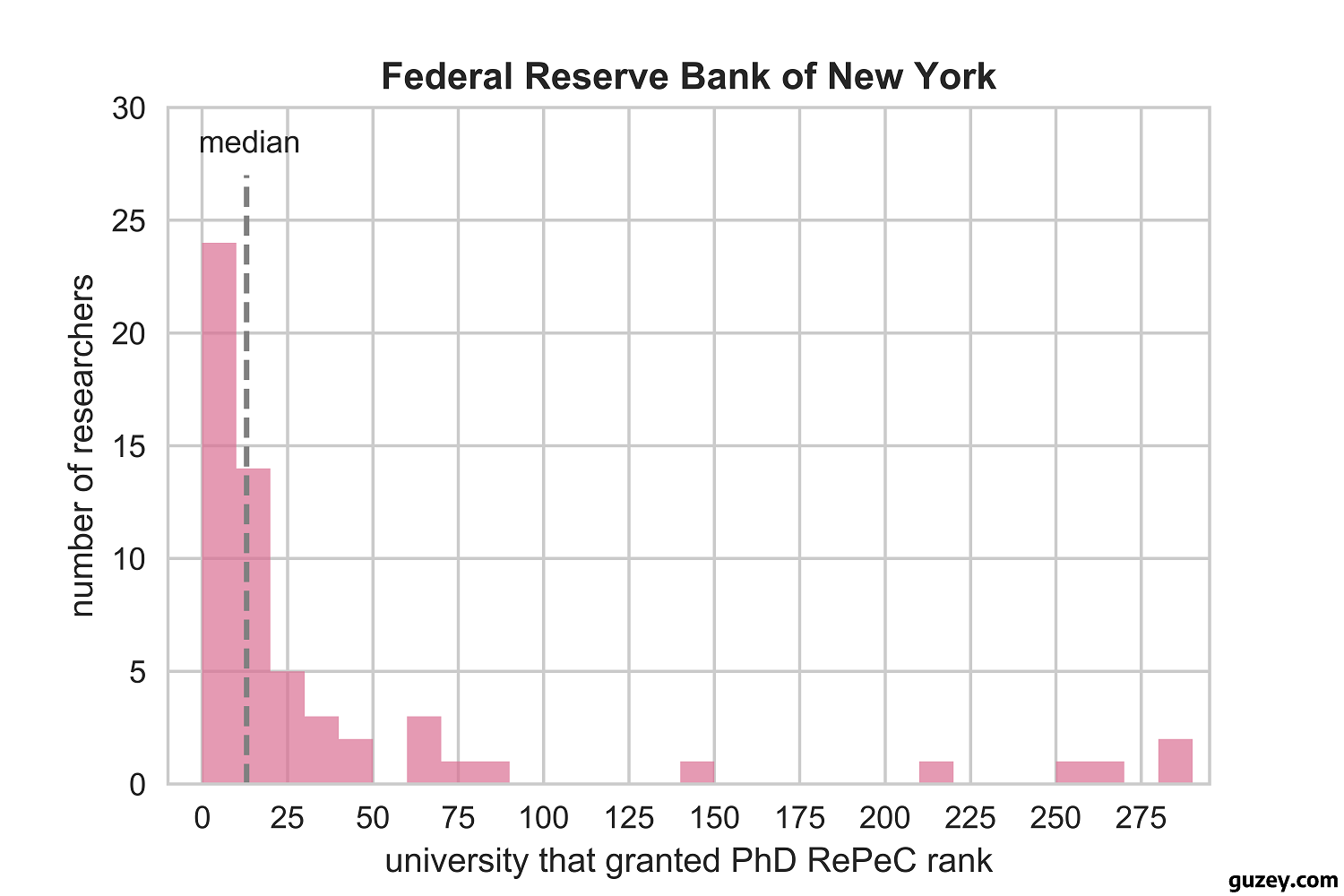 The data suggests that if New York Fed was an Economics Department, it would be solid — not the best — but a solid department. The median researcher there got their PhD from Yale.

BEA’s site lists 44 people in the Research at BEA section. Listed, to be precise. The page was removed after the BEA’s site redesign in mid-August 2018. Looking at the profiles, we can see that BEA hires quite a few Economics PhDs, and for 27 people we can see the universities that granted their PhDs: 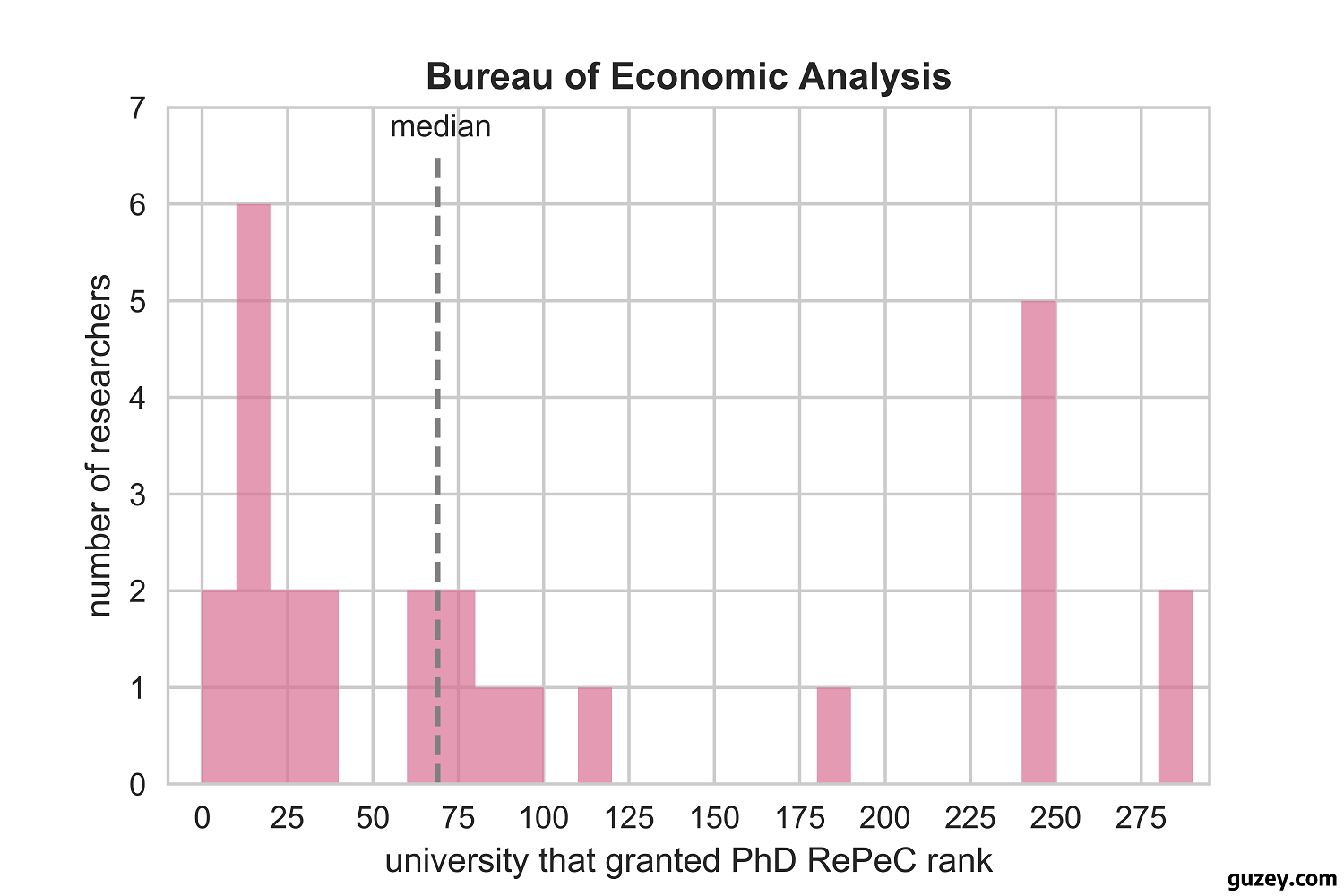 The median researcher at BEA got their Economics PhD at University of Texas-Austin (rank 69). You can look at the full data I used in the appendix.

But BEA is not primarily a research institution and maybe looking at its researchers is not totally fair. So, let’s look at Economists at BEA.

According to FederalPay.org, BEA has 483 employees (LinkedIn lists 348), among them 291 are listed as “Economists” (LinkedIn search for “Economist” at BEA returns 174 results). Of these 174 people:

I was able to get information about bachelor’s degrees for 88 people out of these 132. The ranking I use is from 2014 and sorts the US universities by their average SAT scores. Some example ranks:

The histogram for BEA is: 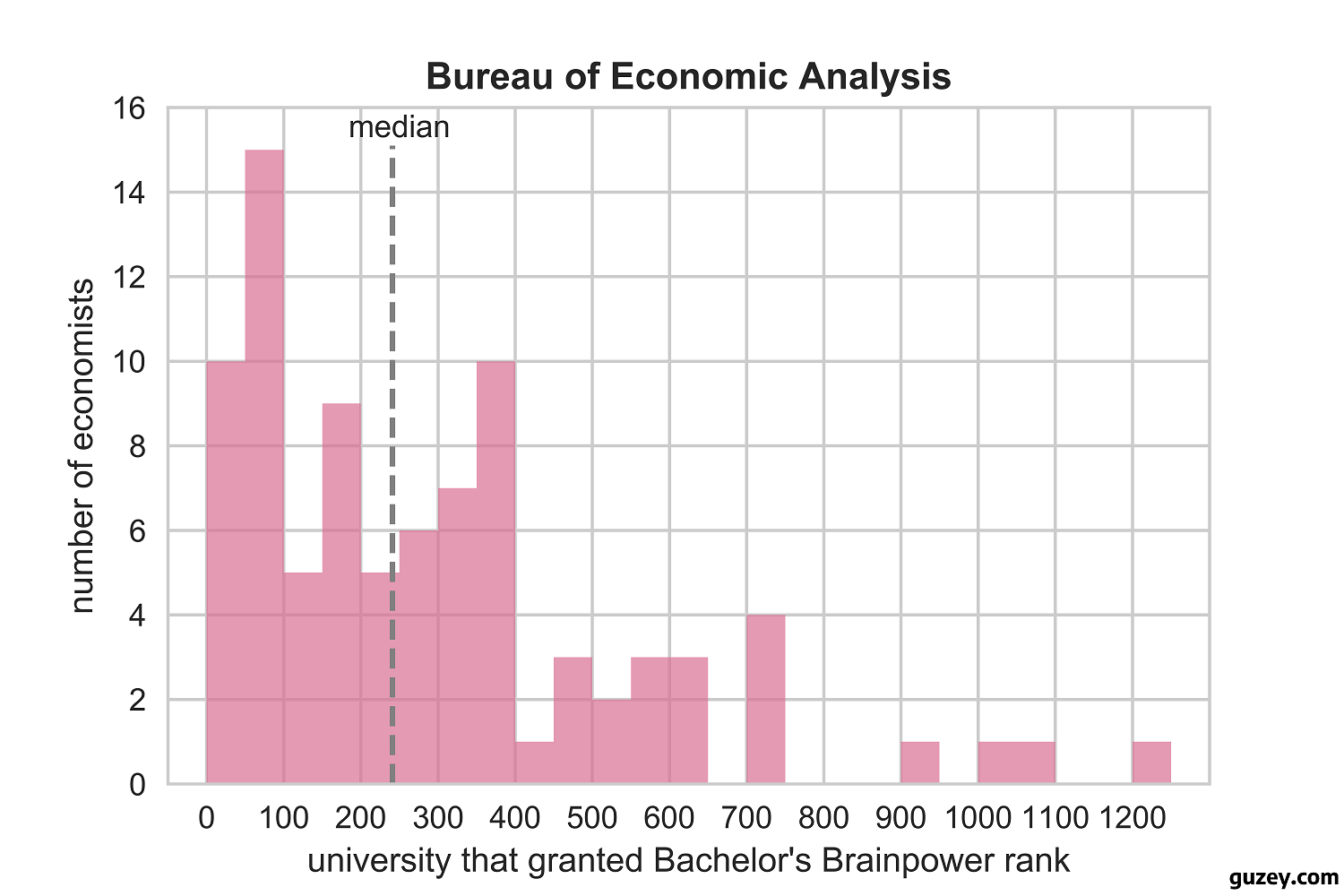 The median Economist at BEA got their Bachelor’s degree at Pennsylvania State University (rank 241, SAT 1175). Zero people finished a top 10 school. An identical argument could be made for most of the other countries' GDP estimates. Speaking of Russia — I don’t ever hear students at top universities talking about working for Rosstat.

Why the constancy of the rate of growth, though?

I think it’s likely that this is significantly a result of the phenomenon described in this article:

To Elfin, however, who has a Harvard master’s diploma on his wall, there’s a kind of circular logic to it all: The schools that the conventional wisdom of the meritocracy regards as the best, are in fact the best–as confirmed by the methodology, itself conclusively ratified by the presence of the most prestigious schools at the top of the list. In 1997, he told The New York Times: “We’ve produced a list that puts Harvard, Yale and Princeton, in whatever order, at the top. This is a nutty list? Something we pulled out of the sky?”

According to sources close to the magazine, a bitter internal struggle broke out when it became clear that Caltech was going to come out on top in the late spring of 1999 after the rankings had been changed to count every category the same way. Fallows’ replacement Stephen Smith and new Special Projects Editor Peter Cary were both reportedly shocked to see that, under the new formula Graham had recommended, the conventional wisdom of the meritocracy would be turned upside down, and there were discussions about whether the rankings should be revised to change the startling results. (Morse and Cary both deny this.) Eventually, a decision was made to keep the new formula and U.S. News received a hefty dose of criticism from baffled readers. Morse declined to say how the formula has been changed for the rankings that will be printed on September 4th of this year. But if Caltech’s ranking drops and one of the three Ivies recovers its crown, read the small print carefully. Caltech’s advantage over the second ranked school last year was an astronomical seven points (more than the difference between #2 and #8). The methodology would have to be monkeyed with substantially to drop Caltech out of the top spot.

People expect sliding growth to be 2-3% and whenever it starts to systematically deviate from this, methodology might be gently adjusted to reflect the “““correct””” growth.

Nope. Definition of GDP is simple. Actually trying to calculate it is hard. Some example problems:

Even if the methodologies tell us how to estimate everything, there’s still a ton of tacit knowledge and ad hoc decisions one needs to make at every step. You can fuck up data analysis in a million of different ways. Also see 1 and 2.

I should add a note here: I neither ever worked on GDP estimation, nor ever worked near a government agency that did it. Most of my knowledge stems from reading Economic papers, BEA documents, and discussions with friends. If you do have good arguments either for estimating GDP being simple or against it — I would love to hear them.

All methodology is done by people at top universities anyways

Uh, maybe? But from my reading of BEA papers this doesn’t seem to be the case. If you actually know anything about this — do let me know.

Thanks to Anastasia Kuptsova for data visualization and valuable comments. Thanks to Maxim Alexeev for stimulating discussion. Thanks to Gleb Posobin and Nicholas Perry for helpful suggestions.

“This note examines mobile phone CPIs for 12 countries… Their CPIs vary wildly, ranging from no change (for Japan) to over 20 percent declines per annum (for New Zealand and the UK)" (a) (via)

As someone working in economic statistics, in the UK, this blogpost is on-the-money.

Minimum, median, and maximum are indicated by color.