Here’s how Travis Kalanick’s inbox looked like back in 2013: 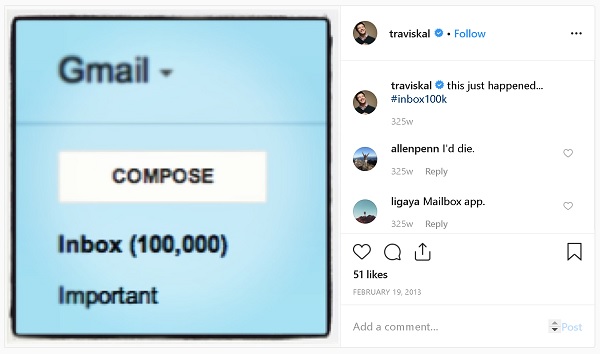 If you wanted to reach Travis — and keep in mind that at some point during the last six years he probably hit #inbox1m — would you just send him one email and hope that it wins the lottery when he randomly reaches for something in his inbox?

Probably not. Instead, what you would do, if you wanted him to actually read your email would be:

Now, if he didn’t reply to you after having 4 chances to do so, that’s a pretty good indication that he doesn’t want to talk to you. But before that - it’s just you being stupid and thinking too much of yourself.

The moral here is the following: whenever you send an email to somebody (especially to somebody busy), imagine that this is what their inbox looks like. Unless you send a follow up, you’re not even trying. And they know it, so unless you follow up, they will probably just ignore you, correctly believing that you do not even want to talk to them so much. As Jennifer Doleac notes (perma):

I live by the rule that if it’s important, the sender will follow up.

This is true even for people you know personally! A story: when I wanted to meet with a really busy friend of mine in SF, I first sent him 2 twitter DMs, then 2 emails, and then 3 text messages, letting him know that I will keep sending one text a day, until an email from him finally landed in my inbox letting me know that he would love to get lunch.

Being used to receiving a personal email a month (at best), it took me years to realize that busy people receive dozens and hundreds of them every day. It is extremely easy to forget about replying to someone in such situation.

Once more, if you actually want a response or if you want to meet someone, IT IS YOUR RESPONSIBILITY TO FOLLOW UP.

A general rule of thumb here seems to be that it is not rude to send 1/2/maaaaybe 3 follow ups to someone you don’t know.

Anyway, I don’t think I can really add much more here, other than mention the fact that only like 20-30% of my cold emails get a response first time (increasing to 40-50% after follow ups), so the rest of the post is just examples of other people telling you to follow up, to make sure you get the message, and a bunch of screenshots from me that show how my advice looks in action:

“I can’t listen to everyone, so I can’t know who’s got the best music. But the ones who follow-up show they’ve got the tenacity and drive to succeed. As long as their music is also good, then those are the ones I want to work with.”

It wasn’t ego. It was just a practical way to deal with a flood, and a pretty good filter for choosing new clients.

Maybe nobody else has an official system like this. But un-officially, they do. Overwhelmed people don’t have time for all the random first-contacts. Patience and persistence separate you from the rest, and show how much you care.

How to Find Consulting Clients (a):

The best projects happen when both sides are invested and the project is solving a critical challenge for the company. I follow up at most 3 times because emails get buried in inboxes, but after that I assume there’s no interest or no critical (“hair-on-fire”) problem they need solving. [emphasis mine]

Don’t get upset if people don’t respond, and chase. Too many founders judge VC’s on response rates — well, some of the best investors out there, the ones that you want, may suck at responding to email. Inbox zero is not a KPI. Getting shit done is a KPI. Is this asymmetric and unfair, since same day turnaround is expected from you? Yup. Totally unfair. Chase with consistency. One email a week. Don’t re-forward the same email — use pre-canned emails that demonstrate some form of company progress or contain some new information. Keep your pipe moving. Have machine like behaviour. Keep emailing until they say no. [emphasis mine]

How should you follow up with an investor? (perma):

I used to think that investors would get annoyed if I bugged them so much. Frankly, now on the other side of the fence, I have so many emails in my inbox, I don’t even notice if someone has pinged me three times. …

Now that I’m on the investor side, let me explain a little bit about what ends up happening – at least if you email me:

We meet. I tell you I’ll think it over / discuss your deal / figure out next steps by X date. I go to my next meeting. And either close the loop at the meeting or say the same thing. I go to my next meeting. In fact, I do all of my meetings back-to-back…for most of the week. While I try to actually follow through by X date, inevitably I’ve erroneously overcommitted, but it’s still in the back of my mind. But I’m juggling so many meetings that I haven’t had time to sit down and think yet or take action, so I still have nothing new to tell you while also having been in your shoes, I realize time is of the essence. And then you email me, and this becomes top-of-mind again, but I still have so many meetings that I haven’t gotten around to it. And then a couple hundred emails pile on top of yours, so it goes to the back of my mind again. And then you email again with a new update. And your deal becomes top-of-mind again, but the cycle continues. 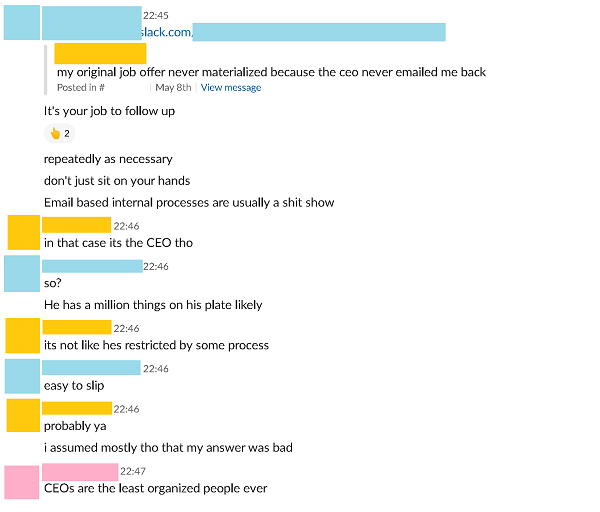 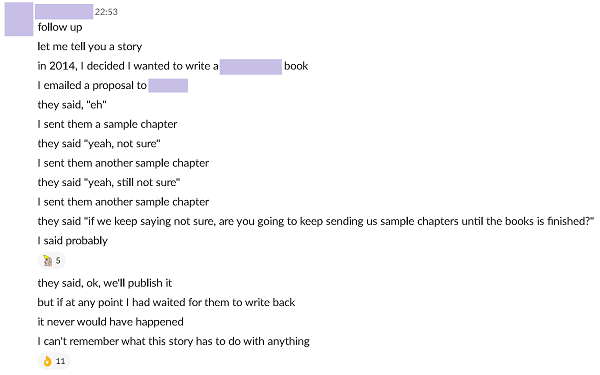 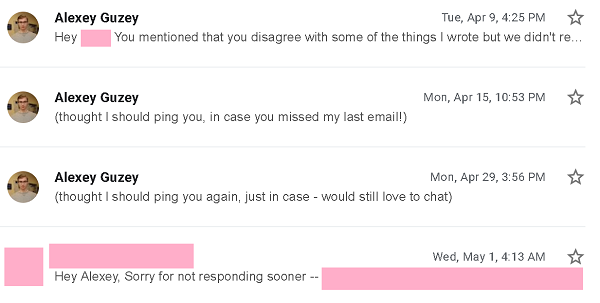 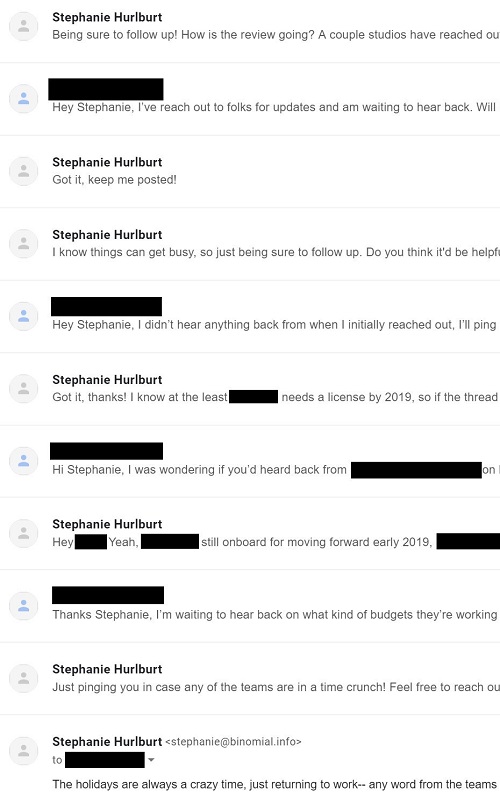 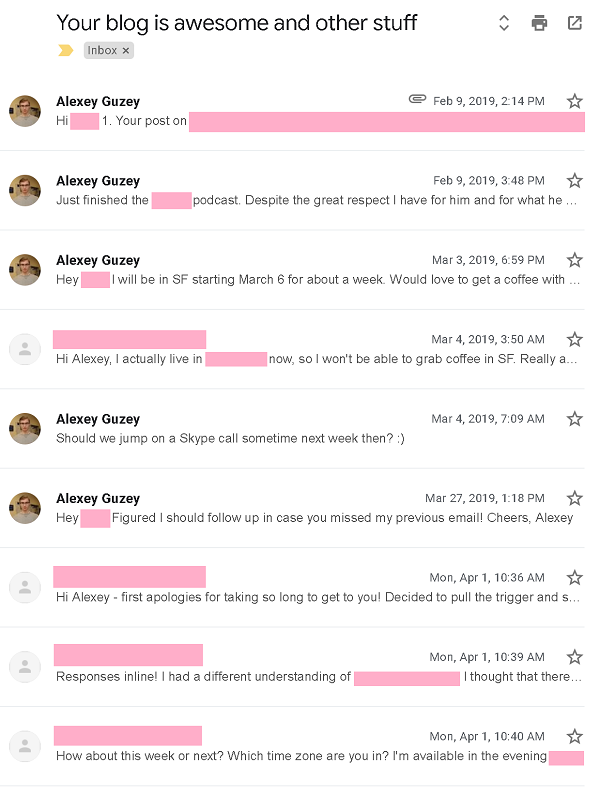 Here’s a fun one:

(after I forwarded him several more issues, he emailed me letting me know that the digest is indeed great and subscribed) 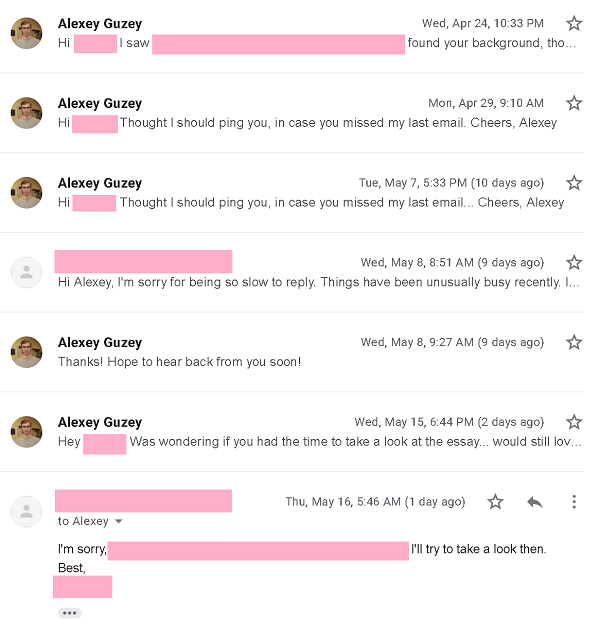 If you write to me, and I do not respond, there’s a chance I mistook your email for academic spam. There’s also a high chance I saw your email (on my phone), thought about responding, forgot to actually respond, and then forgot that I didn’t actually respond. Please email again.

scott how is it possible for you to always respond? About a year ago I crossed over this line where I can’t physically respond to all legitimate email sent to me without spending 3 hours a day on email (which would both cause me to go insane and also get fired).

I definitely do not respond to all legit email. I live by the rule that if it’s important, the sender will follow up.