How to use your wife/husband/gf/bf correctly

5 random top posts
> Is anything inherently difficult?
> Best of Holden Karnofsky and Sam Altman
> Neurodiversity, mutants, and organisational design
> Sir Isaac Newton Made My Titties Sag
> Why You Should Start a Blog Right Now

Recently, I published Why You Should Start a Blog Right Now in which I tried to persuade my readers that they should, well.. start a blog right now. Starting a blog entails taking one very specific action, though: writing. And writing is really fucking hard.

First of all, coming up with a topic to write about is near-impossible when you are just starting out. Second, when you do come up with something to write about and decide to start writing, usually nothing comes out and you just sit in from of the computer for ages. Finally, when you decide to schedule writing at some point in the future, whenever that point comes, there always seem to be so many urgent things to do that you end up postponing writing every time and eventually just give up on the idea altogether.

Some ways of dealing with the first two problems are explored in that post, but today I would like to discuss the last point: there are many things that we should be doing but are not doing. At least, this is the case when we are single. If you found your significant other but still consistently miss doing important but not urgent things, you’re using your SO wrong.

Let’s roll with the writing example. Here’s how to ensure that if you decide to write this Friday 8pm-10pm you will actually do it:

Ok, this was the preparation. Here’s what should happen on Friday: when the alarm goes off and you find yourself wanting to postpone writing, your SO should come in and very tenderly tell you:

*name*, a few days ago, when you were thinking well about the future, rather than being momentarily captured by hyperbolic discounting, you decided that writing right now is the best thing you can do because x, y, and z, and, in fact, you made sure that you don’t have any too urgent things to do, so we know that you can write right now. So maybe you will write right all?

In my model of the world this should be enough in like 90% of the cases and, with a bit more cajoling from your SO, following through on your commitment becomes near certain.

However, if you’re not used to writing, there’s a good chance you will get distracted somehow (for example, it’s terrifyingly easy to spend two hours reading up on the topic and checking your references while not writing a single paragraph), so your SO may hang around somewhere nearby and provide moral support. And, as noted before, you can check some of the tricks that make writing easier here.

Anyway, if you think that the stuff I wrote here makes sense, what you should do right now is to think of something you wanted to do but consistently failed to do in the past (maybe writing) and do the procedure I outlined here.

Here are some of the things my wife did in the last month:

On the other hand, I am responsible for e.g.:

Weekly 1:1s with your partner

I am convinced pretty much everyone would improve their long-term odds of success massively if they asked their SO to take the responsibility for conducting weekly 1:1s with them. My wife is responsible for scheduling and conducting a 1:1 with me about my week and I’m responsible for her one. 1:1s are separate from our personal weekly reviews and are almost always carried out after we did our weekly reviews ourselves.

The structure of our 1:1s is approximately the following:

Ben Kuhn has a great post about doing 1:1s with his partner, called The unreasonable effectiveness of one-on-ones (a):

Eve thinks our one-on-ones sped up her dissertation by about a year. … In general, Eve summarized our one-on-ones as being a forcing function for her to fully decide on longer-term goals and then focus her work on the best way to achieve those goals, rather than getting too bogged down in whatever was right in front of her.

A friend of mine further notes, corroborating my idea that you should try everything at least twice:

It took my wife and me a while to really figure out the format that works best for us when we were just starting out and we’re happy that we didn’t give up on 1:1s even when they sometimes didn’t feel that useful.

It’s also important to note that at some point your SO will probably forget about your meeting and while it’s easy to feel frustrated and to think that they don’t care about you, are irresponsible, etc. etc, the likelier interpretation is that they’re just busy, and you should just gently remind them about it and only take issue with it if it starts happening regularly (in which case you should discuss this during one of your 1:1s…).

But what if I’m single?

If you’re single, you still probably have friends and although it’s typically more difficult to use friends this way (usually, it feels very awkward to say “ok for the next week you’re responsible for my writing” and naturally friends tend to be less involved / invested in our personal lives than our SOs), it’s still possible. Reach out to a friend of yours and suggest them to try to find one thing they want to be accountable for (and for which you can be responsible) and one thing you want to be accountable for (and for which they can be responsible) and I think it will work.

For 1:1s, you should be able to talk about your difficult and personal issues openly with the person who them with you and they should actually care about helping you.

It would be awesome if you tried this technique, Tab Snoozed this post a month into the future and then let me know how well it worked and if it continues to work!

Also, if you find that it does work for one thing, it might be useful to schedule, say weekly meetings with your SO and write down / try to figure out other ways you can help each other that you were missing (using this technique or anything else). Good luck!

Thanks to Anastasia Kuptsova, Masha Taktasheva, and Allison Schneider.

Oh I don’t need this. I remember that I need to write/go to a doctor/whatever.. I just don’t have enough time

This is a plain lie. Literally every single person has like an hour a day to spend however they want (usually, first hour after waking up works well). The fact that you consistently don’t spend it on things that you want to spend it on means you need help.

This is irrelevant. Do you have things that you want to be doing and are systematically not doing? Yes? Then you need a therapist, a coach, a nanny - call it whatever you want but you need someone to help you. If you spent a significant amount of time and effort looking for a clean self-sufficient solution and you didn’t find it, then you should accept a dirty solution. And if at some point in the future you decide that you will be able to maintain e.g. writing regularly on your own, it’s easy to check: you just ask your SO to stop reminding you about it for a week (or for a month) and to check in on you then to see what happened. And if you managed to pull it off for a week (a month), then your SO should continue to check in on you once a week (or maybe less frequently eventually) to ensure that you’re on the right track.

No, this is not irrelevant! Avoiding parent/child dynamic is important for a relationship to be healthy!

Ok, this is true - to an extent. I think it’s inevitable to have some parent/child dynamic in any relationship (along different axes of responsibility) - and it’s okay - but a simple a way to avoid too much of parent/child dynamic is to make sure that both of you are responsible for each other’s stuff! I find it highly doubtful that only one of the partners needs help.

Appendix: why should this work at all? 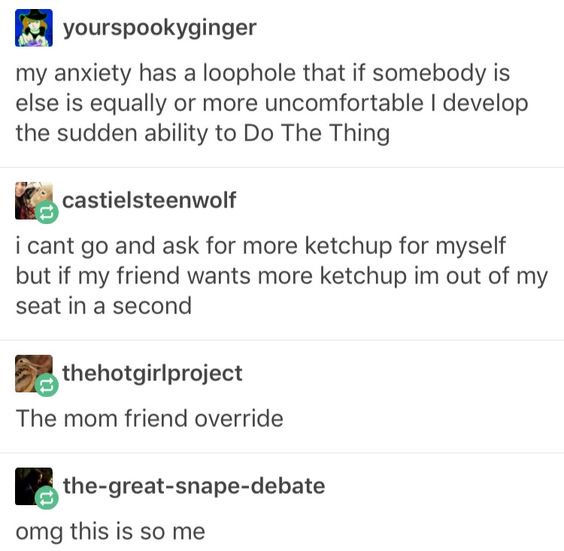 …and by Jordan Peterson in his 12 Rules For Life:

But—and this is the amazing thing—imagine that it isn’t you who feels sick. It’s your dog. So, you take him to the vet. The vet gives you a prescription. What happens then? You have just as many reasons to distrust a vet as a doctor. Furthermore, if you cared so little for your pet that you weren’t concerned with what improper, substandard or error-ridden prescription he might be given, you wouldn’t have taken him to the vet in the first place. Thus, you care. Your actions prove it. In fact, on average, you care more. People are better at filling and properly administering prescription medication to their pets than to themselves. That’s not good. Even from your pet’s perspective, it’s not good. Your pet (probably) loves you, and would be happier if you took your medication. [emphasis mine]

On executive coaching consists of (perma):

I’m amazed at how much of “Executive level coaching” is simply motivational mantras, prioritization, and generic health advice,

all with a lot of 10 cent words thrown in

This doesn’t discount the value people find in coaching

Having someone present for guidance and accountability is invaluable

That said, it is bemusing when you look at the content someone is paying thousands of dollars monthly for

And it boils down to

Not to say it’s bullshit, not at all

But more responsibility to deal, the stakes are higher

from reddit: “therapy is like when you need someone to proofread your paper and point out silly errors, except with your thought process instead of a paper.”

I’ve been having 1-1s with my wife for like a month now after reading your post and they’ve been super useful. It’s mostly been an excellent excuse to make time and talk about stuff that’s bothering us. Sometimes it does also work as an accountability tool though.